Our “My Town” feature usually includes just one alum discussing their favorite parts of their hometown. But in the midst of this pandemic that has kept so many of us at home, we thought it would be fun to take a digital road trip along an American icon: Route 66.

Spanning 2,448 miles, eight states and three time zones, Route 66 originated in 1926. Its original purpose was to connect rural and urban communities and help farmers distribute grain and produce. During the Great Depression, an estimated 210,000 people migrated to California along the highway, and during World War II, Route 66 enabled the U.S. military to quickly and easily transport service personnel between military bases all over the West. “America’s Main Street” hit its peak in the postwar years, as Americans had more free time to vacation and the automobile industry boomed.

Travel John Steinbeck’s “Mother Road” from the comfort of your home using the itinerary below. 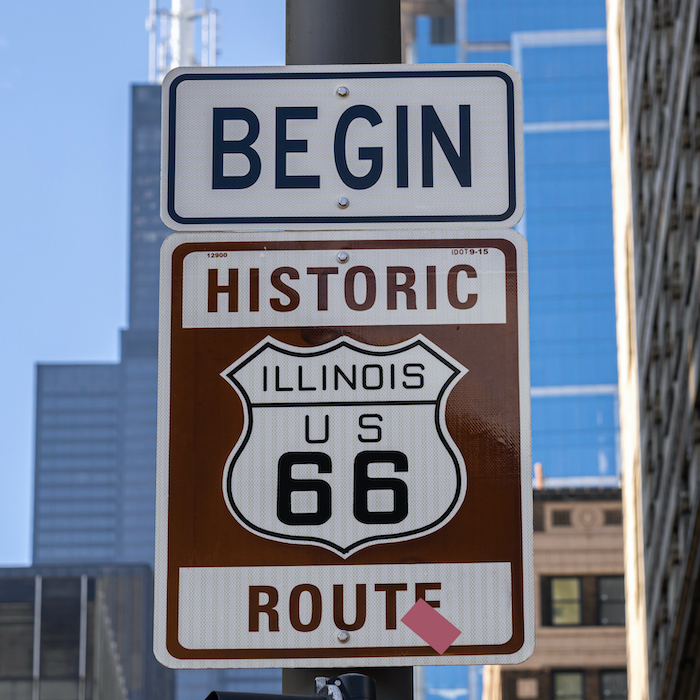 The Windy City had long served as a major waystation for shipping goods west when Route 66 was commissioned. See the official start sign at the intersection of S. Michigan Ave. and E. Adams St., across from the Art Institute of Chicago. Grab a meal at Lou Mitchell’s, family owned since its founding in 1923. Stand on the Ledge at Skydeck Chicago, which rises 103 floors and 1,353 feet over the city giving visitors views over four states on clear days. Also occasionally vertigo. 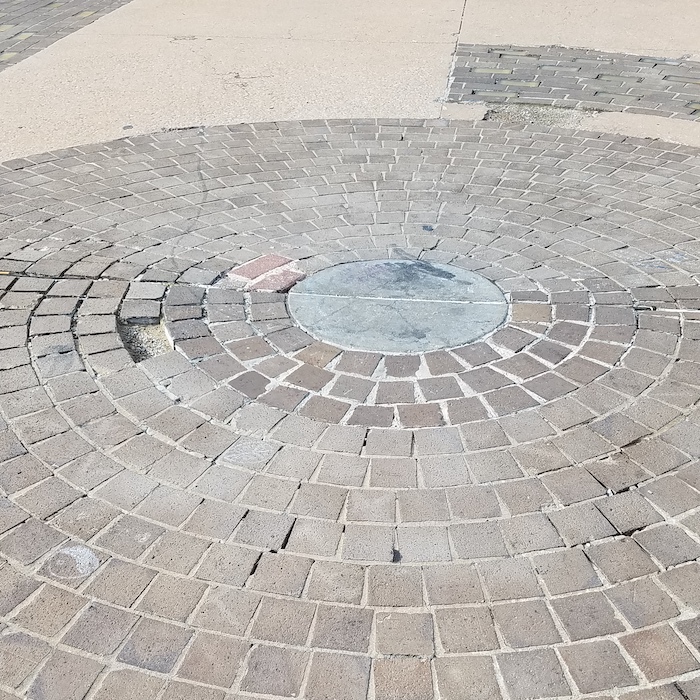 The state’s 400 miles of Route 66 is the longest continuous drivable stretch on the highway. Stop by Buck Atom’s Cosmic Curios on 66, marked by the eponymous Buck Atom, a 21-foot space cowboy currently wearing a mask. Get Will Rogers’ Highway stuck in your head at the Woody Guthrie Center. Located in the heart of the Tulsa Arts District, the museum has artifacts and information about the musician who memorialized Route 66 in song. Visit the Greenwood Cultural Center, whose mission is to promote, preserve and celebrate African American history and culture. The museum also documents the Tulsa Race Massacre that occurred in the Greenwood District—better known as Black Wall Street—in 1921. See what Laura Mangan-Grenier ’87 suggests visitors see and do in Tulsa—including the Center of the Universe (left). 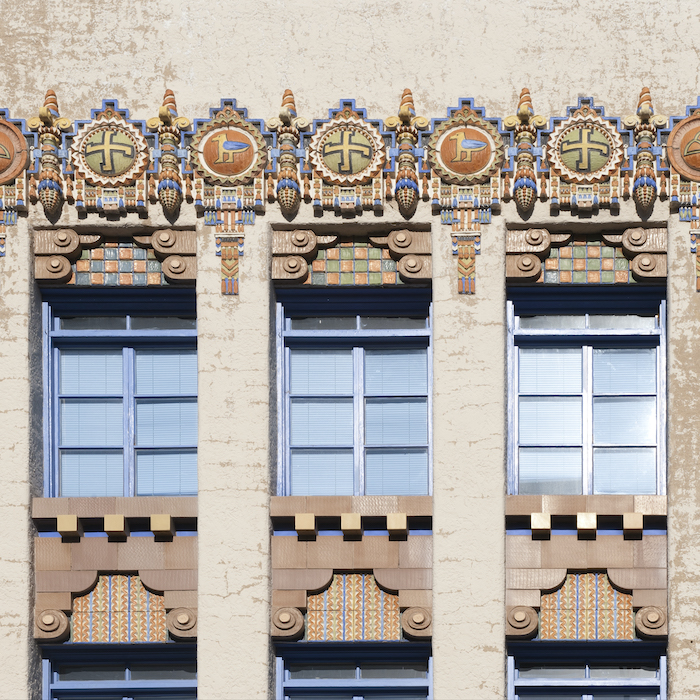 Due to a realignment of the highway, Route 66 crosses itself at Central Avenue and 4th Street in downtown Albuquerque. Explore the Indian Pueblo Cultural Center, operated by the state’s 19 Pueblo communities, to learn the history of the region’s Indigenous cultures, told by the Pueblo people. Check out the De Anza Motor Lodge, a National Register of Historic Places site that boasts a 35-foot-tall neon sign and the parking lot where scenes from AMC’s Breaking Bad were filmed. Visit the KiMo Theater for a self-guided tour of the first theater constructed in the Pueblo Deco style. Built in 1927, its name means “king of its kind” in the Isleta Pueblo language.

Visit Albuquerque with the Thompsons 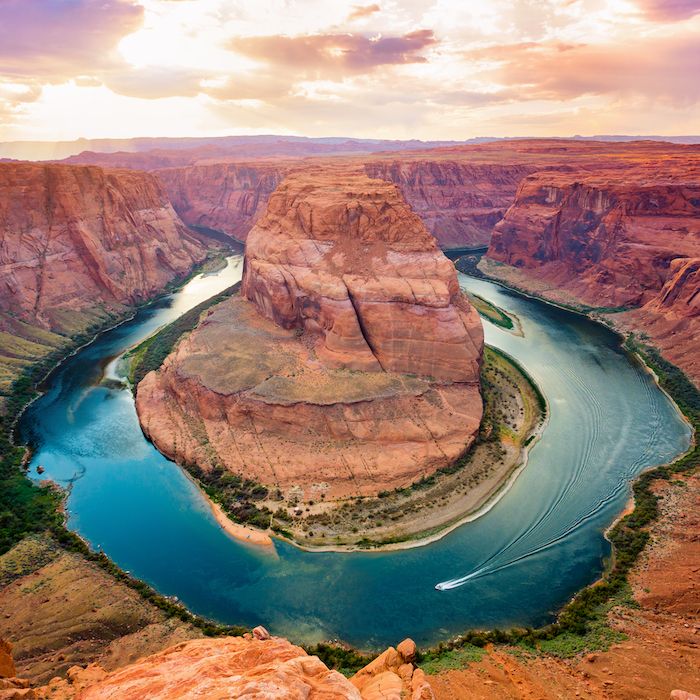 Here travelers will find many miles of the original road still open and usually traffic free. Cruise the Oak Creek Canyon Scenic Drive, a 24-mile stretch between Flagstaff and Sedona. It descends 4,500 from the summit of the Mogollon Rim through sandstone canyons and red-rock monoliths. Make a short detour off Route 66 to see Meteor Crater, the result of a meteor crash 50,000 years ago that struck Arizona with the energy of 20 millions tons of TNT. While not strictly on Route 66, the Grand Canyon is just two hours by car from Sedona. Canyon visitors can bike the Hermit Road, hike below the rim or enter the lottery for tickets to the mule tours.

Travel to Sedona with Jeff McGrath ’98 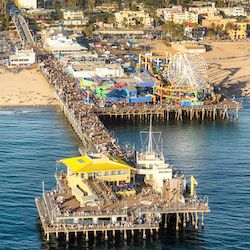 A brass plaque marks the official end of Route 66, at the intersection of Santa Monica Boulevard and Ocean Avenue. Stroll along the Santa Monica Pier and take in the amusement park and Looff carousel before snagging a souvenir. Relax on Venice Beach or walk the boardwalk, a two-mile stretch featuring hundreds of vendors and street performers that is the second-most-visited destination in southern California. Celebrate the end of the trip in style with a stay in one of the 297 rooms and suites at the Fairmont Miramar Hotel, located less than a mile from the pier.

Bill Glauber ’79 takes us on a tour of the Cream City.

Erin Silk ’13 takes us to the Florida Gulf Coast.