The panels will be constructed this summer on the roofs of the General Services building, Barton and Douglass Houses, and the University Union. A solar carport will also be constructed over the top level of the Union Garage. The project is expected to produce nearly 2,000 megawatt hours of solar energy per year.

Electricity produced by the solar panels will go directly towards powering campus buildings. As a result, the university will require less power from off-campus sources, especially during times of peak demand when electricity costs are higher. 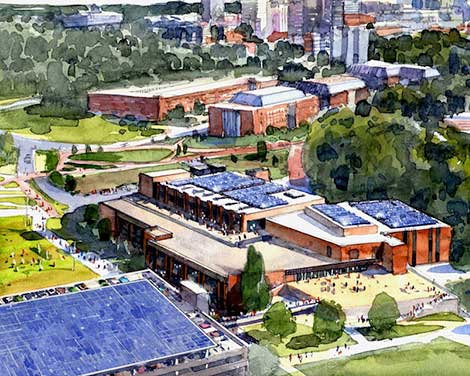 “Peak energy demand is highest on hottest days of the year, and that’s also when solar output is typically at its highest,” said Campus Energy Manager Steve Kolb. “In this way, the solar panels reduce stress from the grid during key times, while also reducing total electricity costs.”

The solar panels will produce varying amounts of energy based on the weather and time of day. On a sunny summer day, the panels could produce as much as eight to 10 percent of the campus electrical load.

Construction on the project is expected to be complete by fall 2016, culminating several years of planning. A group of students including senior SGA members Drew Voigt and Samantha Figueroa originally proposed the solar idea to President Emerita Maravene Loeschke. With her approval, Voigt and Figueroa worked alongside Kolb, TU's Director of Energy Engineering & Conservation Dennis Bohlayer and Procurement Director Lucy Slaich to make the project financially and logistically feasible for campus.

“We were just freshman when we presented the idea, and now it’s coming to fruition,” Voigt said. “It’s been awesome to see that with passion and teamwork, students can turn big ideas into reality.”

"Being involved in the solar committee has been a really rewarding experience overall,” Figueroa said. “I honestly couldn't think of a better way to finish out my time at Towson then with seeing a project I began working on my freshman year come full circle. Breaking ground with this solar project is a huge step for not only this committee but for the university and all future students."

The project is financed through a partnership with WGL energy systems. Over their 20-year lifespan, the panels are expected to save more than 23,000 metric tons of carbon dioxide, which is equivalent to powering more than 3,000 homes for one year or removing nearly 5,000 cars from the road for one year.