It has been 50 years since the Asian Arts & Culture Center opened its doors in 1971 in the College of Fine Arts and Communication. At that time, Towson State College President James Fisher and Vice President Paul Wisdom took steps toward educating students about art and the world by incorporating more art in everyday places. At that time, the College established a collection of Asian art, created the Asian arts gallery, displayed collection items in its gallery and throughout campus and began to offer related educational programs, including festivals, performances, artist residencies, and lectures. Towson State College also offered various classes focused on Asian history and culture and involved the students in these courses in Center programming, such as a kabuki play. These activities were especially valued at a time when the United States was immersed in conflict in Southeast Asia.

The art collection was launched with a gift of Chinese and Japanese ivory carvings by local business owner Frank Roberts whose main interest was in sharing his collection. The original gallery was named in honor of Mr. Roberts.

The Center was originally located on the fifth floor of the Albert S. Cook Library until the opening of the new Fine Arts Building in November 1973. The Roberts Gallery was dedicated to exhibiting the collection. 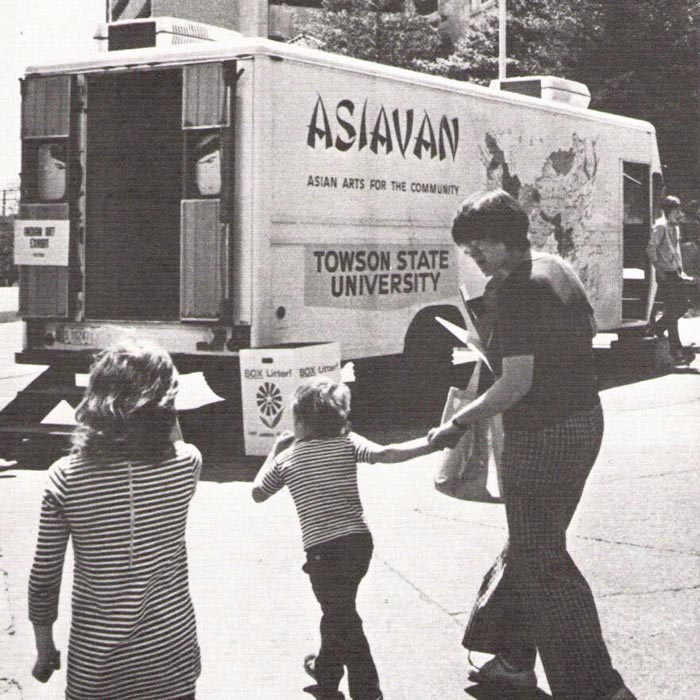 The Asiavan program was established in 1975. The van transported exhibits to area schools, playgrounds, shopping centers and parks.  The van also included film screenings and audio recordings of traditional and contemporary Asian music.

When AA&CC became a self-support department of Towson University in 1995, committed faculty, staff, and community members established a membership program to generate operating funds. In 1997, Emeritus COFAC Dean Gilbert A. Brungardt founded an Advisory Board and served as the board president for ten years.

In 2005 we moved into a new space with a new Asian Arts Gallery in the renovated Center for the Arts. Our new office and 1,500-square-foot gallery enjoy increased visibility and accessibility just off the main atrium of the building.

In 2007 the Advisory Board created the Gilbert A. Brungardt Endowment to honor Dr. Brungardt and provide supplemental funding for Center operations.

Today we continue to serve the university and the Baltimore-Washington communities through a range of experiences with Asian arts and culture.