Still others have been added during the past 85 years. Some are native, some are exotics from various parts of the world, some are deciduous and lose their leaves in the fall, and others are green even during the coldest months of the year.

The purpose of this short self-guided walking tour is to call attention to the trees of Towson and provide a brief respite from the demands of the day. We hope you find the tour an informative and relaxing experience that heightens your appreciation for the trees.

The walk was developed by George Krause of Facilities Management and James Hull of the Department of Biological Sciences with assistance from Steve Heaney of the Department of English and the TU Tree Club. The tour includes 20 trees and takes approximately 30 minutes. It begins in back of Scarborough Hall. 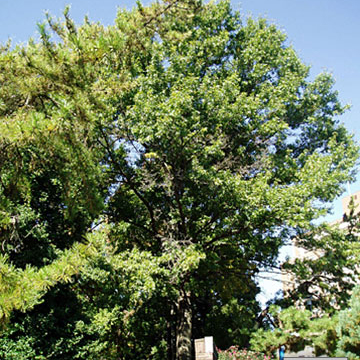 Native to Maryland and Eastern North America. 70-100 feet. Graceful in form, the silver maple is a fast-growing species frequently found on riverbanks in the wild. The wood is weak and brittle, prone to break in storms. The sharp-toothed, five-lobed leaves, 6-7 inches long and 4-6 inches across, are pale green with bright silvery white undersides and are deeply incised. The bark is smooth silvery gray, becoming furrowed and scaly as the tree matures. 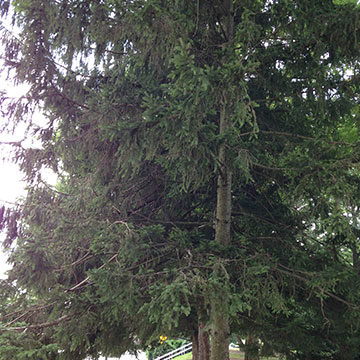 Native to Europe. 60-110 feet. Norway spruce is commonly planted throughout Eastern North America and has naturalized in some areas. Its conical shape and strongly drooping branches are characteristic. The square-sided, sharp-pointed needles are dark green. Older trees produce cones 4-6 inches long. The bark is brown and scaly. It is valued as a windbreak in cold areas. 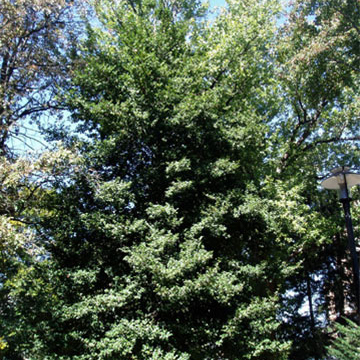 Native to Maryland and the Southeastern United States. 40-50 feet. American holly is a popular evergreen specimen plant. Densely pyramidal in youth, it becomes more open with age. The glossy 1.5-3.5 inch long leaves are dark green and arrayed with spines. Many birds and mammals eat the bright red berry-like fruits. The fine-grained white wood is used in inlay woodwork and piano keys. George Washington's dentures were made from holly wood. It is the Delaware state tree. 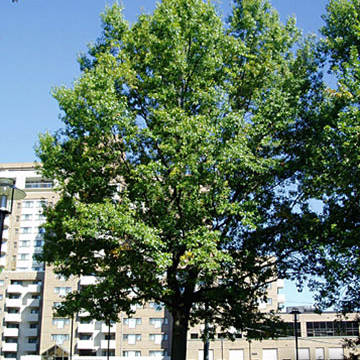 Native to Maryland, Central and Eastern North America. 60-80 feet. Pin oak is named for the many short pin-like twigs, which were once used as wooden pegs. One of the faster growing oaks, pin oak frequently is used as a street tree throughout the Eastern United States because of its pyramidal growth habit and beautiful fall color. The bright green 4-6-inch-long leaves change to copper, bronze and red in the fall. Small, nearly rounded acorns, which take two years to mature, are partially enclosed in a shallow reddish-brown cup. 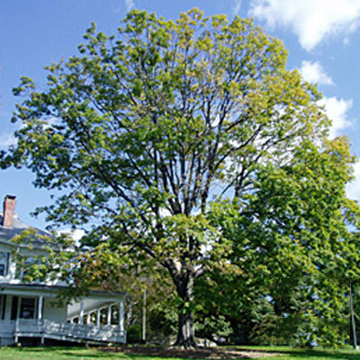 Native to Maryland and Eastern North America. 80-100 feet. Sugar maple is celebrated for its spectacular display of orange, red and yellow fall foliage in cold-winter areas. Sugar maple sap can be tapped in early spring and made into maple syrup. Its habit is upright and oval to round. The foliage is usually dense. In summer, the five-lobed leaves, 3-6 inches long, are medium to dark green. The gray-brown bark becomes ridged and furrowed with age. Sugar maple is susceptible to air and water-borne pollutants and performs best in protected areas. It is the state tree of Vermont, New York, Wisconsin and West Virginia. 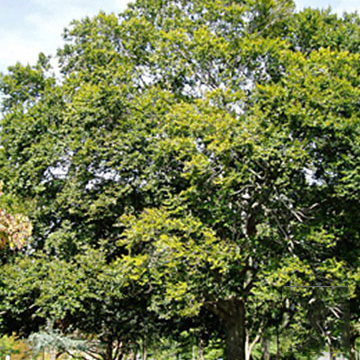 Native to Maryland and Eastern North America. 80-115 feet. Easily recognized by its smooth gray bark, the beech is one of the most distinctive trees of North America. It is an imposing tree, often with a short trunk and wide-spreading crown. The 2-5-inch-long saw-toothed leaves are dark green in the summer and turn a lovely burnished gold in the fall. Beech trees flower in April or early May. The beechnut, a favorite food for many types of wildlife, is contained in a light brown prickly casing. 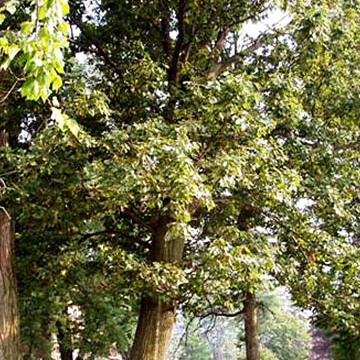 Native to Maryland and the Eastern United States. 60-80 feet. Black locust can grow on nutrient-poor soils due to its ability to fix atmospheric nitrogen with a symbiotic bacterium, thereby providing its own fertilizer. The gray-brown bark is deeply furrowed. Leaves are compound, 8-14 inches long with seven to 20 oval leaflets that fold together at night. In spring, the black locust produces clusters of fragrant, white, pea-like flowers that attract honeybees. The fruit is a short, flat, dark brown pod. The wood is used to make long-lasting fence posts. 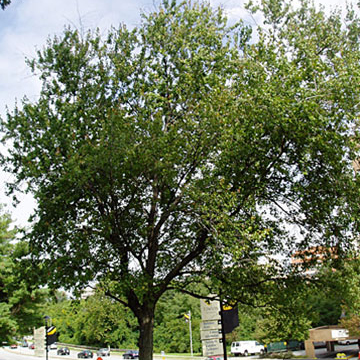 Native to Maryland and Eastern North America. 60-90 feet. Red maple is valued for its blazing fall color display of brilliant red, orange or yellow leaves. The bark is smooth and gray, becoming fissured with age. The leaves are medium to dark green in summer, have saw-toothed edges, and are 2-4 inches long with three or five-pointed lobes. The red umbrella-like flowers are attractive in late winter or early spring. Mature trees typically have a dense rounded crown. It is the state tree of Rhode Island. 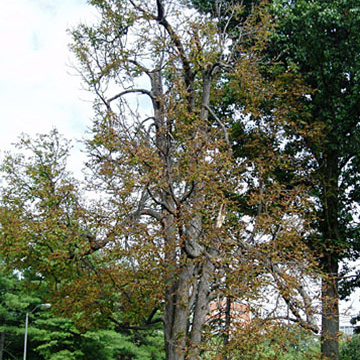 Native to Europe. 70-100 feet. Related to our native buckeyes, horse chestnut is a large deciduous tree planted throughout the Eastern United States. One of the first trees to leaf out in spring, distinctive compound leaves fan into five to seven leaflets 4-8 inches long. The bark is brown and somewhat scaly. Long-lasting white, bell-shaped blossoms attractive to hummingbirds are borne in 5-12-inch-long clusters in early to mid-May. The 2-inch diameter fruit is covered with short spines. 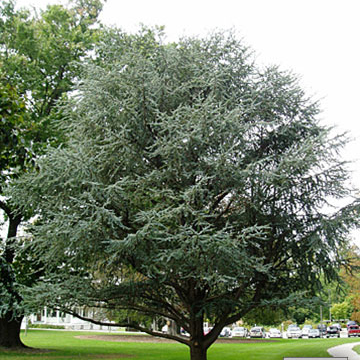 Native to North Africa. 60-100 feet. Atlas cedar is a slow-growing conifer that matures into a handsome specimen tree with spreading branches and a pyramidal form. The short stiff needles are bluish green, varying in color from silvery blue to light green. The gray bark is smooth and shiny, becoming cracked and scaly with age. In the fall, 3-4 inch cylindrical cones, depressed at the tip, grow upright on the upper sides of branches and shed clouds of yellow pollen. 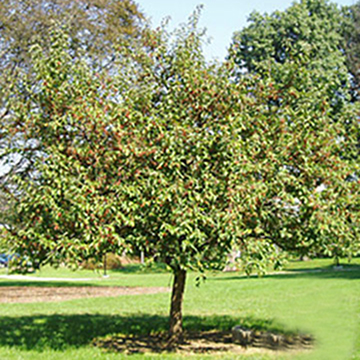 Native to Japan. 15-20 feet. This small tree is one of over 200 varieties of ornamental crabapples. Hardy and showy, it is prized in the landscape for bearing a profusion of springtime blossoms. The flowers are red in the bud, opening to white. The oval green-to-purple leaves are dense and finely textured. Small red or yellow fruit is produced between August and October. 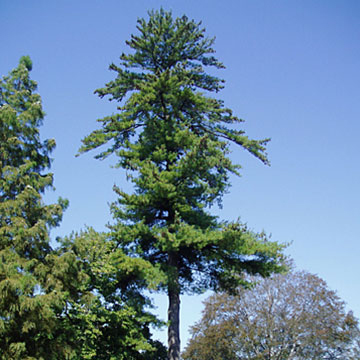 Native to Maryland and Eastern North America. 70-110 feet. Eastern white pine is a tall, fast-growing evergreen of economic and ornamental value. The soft, flexible, blue-green 3-5 inch long needles are grouped in fives. The bark is gray and becomes furrowed with age. The slender cones are 4-8 inches long and often slightly curved. Once plentiful, white pine was used in shipbuilding to make masts and spars. The soft, white, straight-grained wood is now primarily used for millwork. It is the state tree of Maine and Michigan. 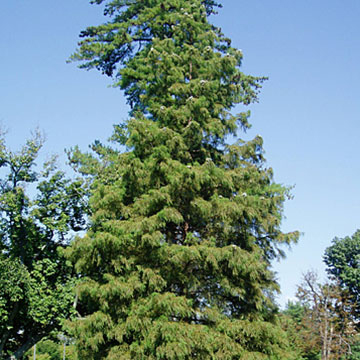 Native to Maryland and the Southeastern United States. 70-100 feet. A relative of the California redwood, this stately deciduous conifer is typically found in swamps and river bottoms. Its growth is slender and pyramidal. Two rows of soft, flexible, sage-green leaves, which turn a bright orange brown in the fall, are borne feather-like along a green stem. In the wild bald cypress forms upright conical roots called "knees" and provides valuable habitat to many species, including eagles and ospreys. (Battle Creek Cypress Swamp, one of the northern-most naturally occurring cypress swamps in the United States, is located in Calvert County, Md.). The bald cypress is the state tree of Louisiana. 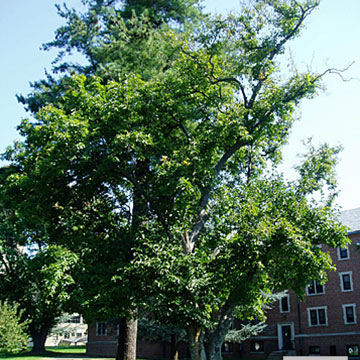 Hybrid of European origin. 20-30 feet. One of the most popular ornamental magnolias in American gardens, numerous cultivars are available. The leaves are 3-6 inches long and are a deep, flat green in the summer and occasionally turn yellow-brown in the fall. The bark is smooth and gray. Saucer magnolias produce, beautiful 5-10 inch flowers ranging in color from white to pink to purple. This is a small deciduous tree often used in groupings, corner plantings or as a specimen lawn tree. 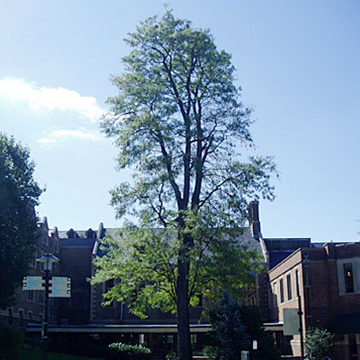 Native to Maryland and the Central United States. 40-80 feet. In many parts of the country, honey locust is a popular street tree, replacing elms that perished during the Dutch elm disease epidemic. Its leaves are pinnately compound and 6-12 inches long, bright green in the summer, and turning yellow in the fall. Due to its open-crowned habit and graceful leaves, the honey locust casts interesting shade patterns. Trunks and branches are formidably spiny (spineless varieties are available). The distinctive fruit is a dark maroon brown twisting curved pod 12-18 inches long containing a honeyed substance between the seeds. 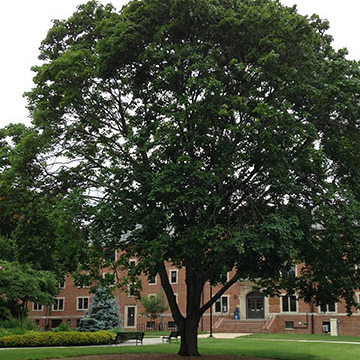 Native to Europe. Naturalized in the United States. 50-70 feet. Because of its tolerance for poor soil conditions and urban environments, Norway maple was once a widely recommended street tree. It has escaped cultivation and is now considered an undesirable invasive because it competes aggressively with native trees. The leaves are four to seven inches across with five sharp-pointed lobes. Dark green in summer, the leaves change to yellow in the fall.

You can print out a map of the Trees of Towson (PDF) to take on the walking tour.

Map of the Maryland Big Trees on Campus

View the parts of TU’s campus that are home to the 13 trees registered in Maryland's Big Tree program.